For thirty-five girls, the Selection is the chance of a lifetime. The opportunity to escape the life laid out for them since birth. To be swept up in a world of glittering gowns and priceless jewels. To live in a palace and compete for the heart of gorgeous Prince Maxon.

But for America Singer, being Selected is a nightmare. It means turning her back on her secret love with Aspen, who is a caste below her. Leaving her home to enter a fierce competition for a crown she doesn’t want. Living in a palace that is constantly threatened by violent rebel attacks.

Then America meets Prince Maxon. Gradually, she starts to question all the plans she’s made for herself—and realizes that the life she’s always dreamed of may not compare to a future she never imagined.

Imagine what would happen if the TV series “The Bachelor” got a dystopian make-over.  You’d get Kiera Cass’s The Selection.

I am admittedly drawn to book covers with pretty dresses.  Among some of my favorites are The Luxe, Matched, and Wither.  I’m a sucker for ball gowns, which is why I first grabbed Cass’s series.  After I read the summary, however, I was hesitant.  You see, I despise “The Bachelor” for its depiction of self-serving, ruthless, catty, women and misogynistic  GQ-wanna-be boys.

But, I started reading anyways after several of my regulars demanded that I read nothing else until I had tried The Selection.

Your girls who are already fans of the dystopian will devour this series.  It’s complete with the warring classes, love triangle, plot twists, and budding-heroine.  I also have had great success with my “non-reader” girls.  The science fiction aspect is understated, appearing really only in the fact that the series takes place in the future after World War IV. 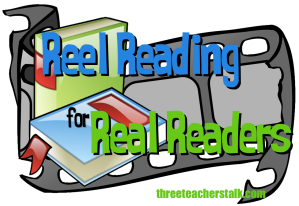 The Elite, which is out now, continues the trilogy with The One set to be released May 6th.

This entry was posted in book trailer, Dystopian, reel reads, YA and tagged Kiera Cass, The Selection.